Just a short note to let everyone know that the Star Frontiersman website has been moved to a new webserver that supports SSL and the HTTPS protocol. It shouldn't any of the content or functionality but you should see the little lock icon in the address bar now.

This is just a short note to let everyone know that I've completed redacting the Dragon Magazine articles from the Star Frontiersman issues and put the redacted issues back on-line. The magazines are no longer available from DriveThruRPG but will remain on-line here on the website. WotC has asked that we not produce any new issues but have no problem with the old material staying online.

Well folks, the verdict is in. I just heard back from WotC.

The bad news:
There will be no new issues of the Frontier Explorer or Star Frontiersman. I disagree with their reasoning behind it and may be able to change their mind in the future but for now I will be complying with with their wishes.

Also, I'll need to pull the remastered digital maps that i created (Port Loren, KH station deck plan, Town map, and the original Assault Scout deck plans). Since these were designed to be near exact replicas of the originals, this is understandable.

The good news:
Everything else already published stays up! I don't have to pull the websites or already published materials down. I cannot express how happy this makes me as I had feared the worst. The efforts of everyone who created content for the magazine will stay on-line for everyone to enjoy.

For the issues of the Star Frontiersman that I had to pull, I'll be removing the Dragon articles and reposting them over the next few weeks. I also don't have to pull out the original artwork that was used in any of the magazines. I was given permission to keep all that up.

Other news:
I'm waiting to hear if I actually need to pull the material off of DriveThruRPG or not. The answer I got to that question wasn't clear. Even if I do, they will stay up on the websites.

Thank you to everyone who has supported the magazines over the years whether as authors, artists, or just readers.

I was contacted last week by WotC to let me know that they were revoking my permissions to post materials related to the Star Frontiers game and the original Dragon magazine articles.

Based on the wording of the information I received, that definitely means that all the remastered rules and modules need to come down. It also means that any magazine issues that contain Dragon articles will need to be removed as well. What is unclear (and I'm waiting to hear back from them) is if any of the other, fan created material has to come down as well.

As WotC owns the copyright on Star Frontiers, this is completely within their rights to request. We always knew it would eventually happen if they ever started publishing/selling material related to Star Frontiers again which they have with the recent release of PDF and print-on-demand versions of the original material on DriveThruRPG (and related sites).

In order to comply with the request, I'll be removing the remastered rules, modules, and affected magazine issues later this week after the first of the month. If they allow the magazine issues to stay up, I'll repost the removed issues with the Dragon magazine articles redacted. During my conversation with WotC, they said that even though things had to come down now, there may be a chance that everything could be reposted in the future. We'll just have to wait and see.

I'll keep everyone informed as I learn more.

This is a very late announcement but the starfrontiers.us domain is back up at its correct domain name. The domain issues have been resolved. I just forgot to post an update here when it happened.

Due to issues with getting the starfrontiers.us domain registered, that domain is currently inactive. However, you can still access the site by going to https://sfus.starfrontiers.info. The website will remain up at that address until they can get the domain registration figured out. 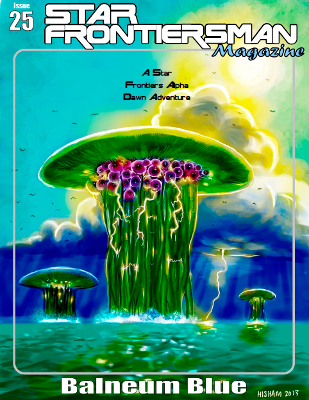 Issue 25 of the Star Frontiersman is now available for download. This issue contains a complete and detailed adventure on a water world by Ben Gorman. One the the great aspects of this adventures is its huge underwater beastiary with dozens of creatures for the game or that you can lift for other adventures. Ben has also done a great job of providing a lot of background on underwater situations to help prepare the referee in running the game.

As usual this issue is filled with great material and great artwork so grab your copy today and we'll see you around the Frontier.

Welcome to the new Star Frontiersman web site. We have all the same great content but with a shiny new look and now separate from the DwD Studios site. Watch this space for news and updates about the magazine.

Along with the new website, we are also announcing that ownership and management of the magazine has been transferred from Bill Logan, who originally created the Star Frontiersman back in early 2007 and the co-founder of DwD Studios, which has run the magazine since late 2009, to Tom Stephens, the co-founder and senior editor of the Frontier Explorer magazine. With this change, the two Star Frontiers fan magazines come under one roof and will be run by Frontier Explorer Media.

What does this mean for the Star Frontiersman? The short answer is that we're not completely sure yet. However, we have at least one more issue ready to go that will be coming out in the very near future. In addition, we have a number of remastered Dragon articles that have yet to be published and there are still a number of the original modules that haven't been given the remastered treatment. We hope to get to all those items in the future. Also, we are completely committed to keep the magazine and remastered rules available and on-line. It defintely won't be going away.

A final project is to complete the online, wiki version of the Star Frontiersman articles on the Star Frontiers Network wiki. I started this years ago but it kind of fell by the wayside over the years. Issues 1-6 and 14 are completely on line. I'd like to see the others go up as well. If you're interested in helping out with this project let us know at editors@starfrontersman.com.

And we're still accepting submissions. If you want to submit content to the magazine, please do so. All you have to do is hit the big gold "Submit New Content" button on the left. The only change is that any submissions will go into a shared queue, to appear either in the Frontier Explorer or the Star Frontiersman as we see fit. The truth is that editing and producing a fan magazine of this size is a lot of work. We're still figuring out how to juggle both of them and do them both justice. If you're interested in helping out and getting involved, feel free to drop me a line at editors@starfrontiersman.com and let me know.

If you want to be kept abreast of new issues or other announcements, consider signing up for our newsletter mailing list. We'll use that list to send out occasional (probably less than six times a year) announcements of new issues and other news related to Star Frontiers in general. And if you had signed up for the newsletter in the past, please do so again as that old mailing list was lost in a database crash on the old site.

Whether you've traveled the spaceways of the Frontier for years or are just arriving for the first time, we hope you'll keep coming back for new adventures with both the Star Frontiersman and the Frontier Explorer. We look forward to seeing you in the spacelanes.